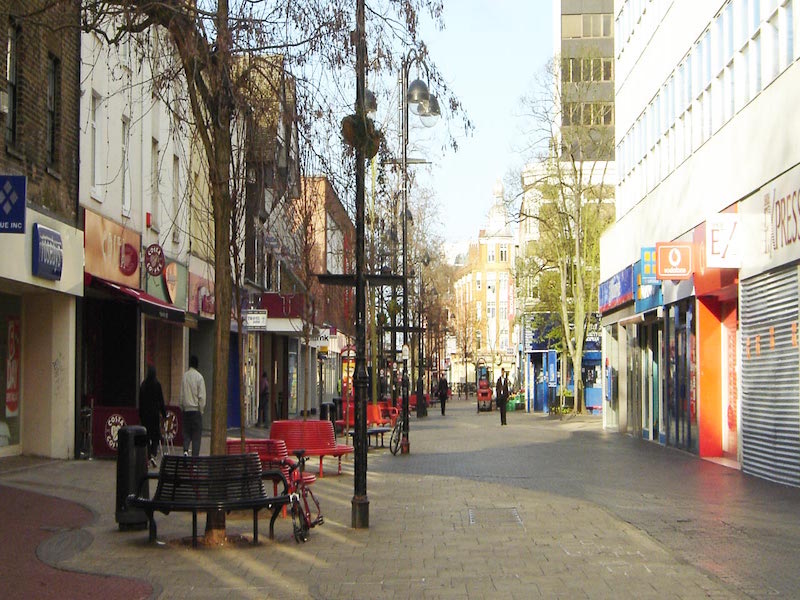 Feltham is a popular commuter area, lying around 15 miles to the west of Central London. It has expanded significantly in recent years, and has lots of families as well as professionals.

Despite its reinvention as a lively residential area Feltham has a prestigious history, being the place where both Spitfires and Aston Martins were produced. It was previously home to some big name celebrities including Freddie Mercury, Brian May and Led Zeppelin star, Jimmy Page.

Eagle-eyed music fans might spot the shopping area, The Centre, as the location for megastar rock band Oasis’ 1997 hit, Stand By Me.

Much of Feltham’s economy is bound closely to air transport; this has increased with the development of nearby Heathrow over the years. During the past Feltham played a significant role in aircraft manufacture too, particularly during the war, and even became a target for German bombers.

London Air Park is a place where the past history of aircraft manufacture and transport can be seen. Originally created as an airfield which stood in the grounds of Hanworth Park House, it went on to play an integral role in aircraft manufacture in World War II. Fast forward to the modern day and it’s now an open green space with a nod to its past, such as the giant propeller statue.

Feltham has many other outdoor spaces too and is one of the greenest districts in Greater London. At more than 30 hectares, Crane Park is one of the most notable of these, following the River Thames for around two miles. As well as being an important place for wildlife there’s also some fascinating historical architecture in the park, such as the Shot Tower, formerly part of The Hounslow Gunpowder Works.

Our coach and minibus operators know Feltham well. Here are some popular coach pick up locations to inspire your trip:

Despite its proximity to the centre of the city, it can take 45 minutes or more to travel to Central London by public transport from Feltham. To reach some of the more popular areas such as Leicester Square, you’ll also have to travel to Hatton Cross to catch a train.

Coach or minibus travel is a far easier option, taking you directly to your destination where you’ll arrive feeling relaxed and refreshed. Our coach hire operators have transport available in a variety of sizes so whether you have 15 in your party or 50, you’ll find something to suit.

We have a variety of types of transport available, including both luxury and executive options. All of our coach hire operators run modern, well equipped vehicles with a range of features including WiFi, air conditioning, on-board bathrooms and reclining chairs.

Choosing to travel by coach is easier, comfortable and more convenient, allowing you to relax during the journey rather than battle through the crowds.

If you’re in a smaller group we have minibuses for hire too. Catering for smaller groups, they offer the same high quality as well as space for luggage and personal belongings.

Whether you choose to hire a minibus or a coach, we offer the same simple process. All you need to do is enter a few details about what you need and when, and let us do the rest. In next to no time you’ll receive up to four quotes from different companies.

It’s up to you whether you choose to book and if so, who you choose. You’ll be able to contact the operator directly, making it easy from start to finish.

Coach Hire Comparison has an average rating of 4.9 out of 5 from 838 reviews.

"Very easy to use site. Quick quotes and responses to questions."

"Everything was quick and easy. I phoned with query’s I had and everyone was kind and helpful"

"Very simple to use and a quick response The site provided the lowest quote for my needs following a number of calls to other minibus providers."

Just a stone’s throw from all the big venues in and around London, Feltham is the perfect base for any event. Travel there in comfort and style with our minibus hire operators, or if you’re in a larger group, we have coaches available too.

At just 2 miles from Heathrow Airport, Feltham is the ideal spot for airport transfers. If you need to stop overnight before catching your flight, our minibus hire operators can help with transport. Making it easy and stress-free to reach the airport on time, your party can all travel in one vehicle with your luggage, avoiding any hassle or inconvenience.

Feltham is close to a number of luxury wedding venues such as St Giles Heathrow, making it the perfect spot to get hitched. Our luxury minibus hire operators can transport your guests in style so you can concentrate on enjoying the big day.

From St Mark’s Catholic School to Hampton School, there’s no shortage of educational institutions in Feltham. If you’re organising a school trip, our coach hire operators can help. With experienced drivers and modern transport, it’s one less thing to have to worry about.

As well as being close to the capital, Feltham’s location next to Heathrow has made it a hub for business, particularly within the logistics industry. If you want to impress your business visitors, use an executive minibus hire service and offer VIP transport in style.

"Very easy to use site. Quick quotes and responses to questions."

"Everything was quick and easy. I phoned with query’s I had and everyone was kind and helpful"

"Very simple to use and a quick response The site provided the lowest quote for my needs following a number of calls to other minibus providers."

"very easy to use"

"Very easy to use"

"So quick and easy. I wont book a bus via any other method again."

"So easy to use and book"